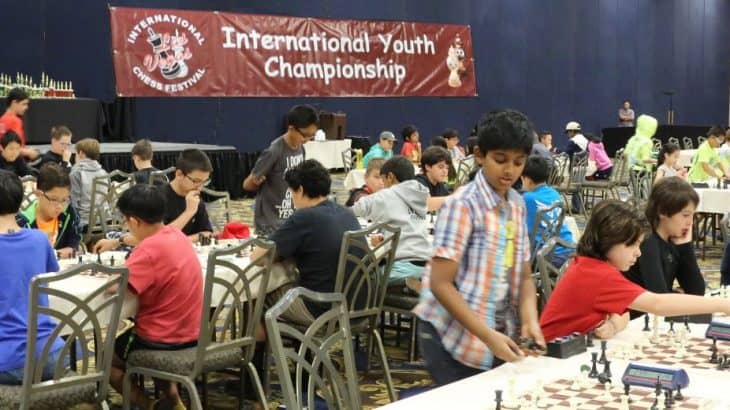 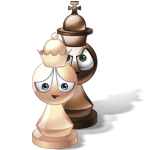 For players age 14 and under, the International Youth Championship highlights a weekend of chess fun.  Players compete for trophies, chess prizes and a computer loaded with software and chess videos donated by ChessDVDs.com.

Hundreds of girls and boys from all over the world compete for trophies, prizes and the thrill of the game. Players are grouped by age and rating so everyone can be competitive. The tournaments are Swiss System events, which means that every player gets to play all rounds: no eliminations.

The youth events are separated from the adult events but players, parents and coaches are welcome to participate or watch any of the chess festival events. Many of the kids participate in the open side events and lectures.

Game/60 + 5 second delay. This means each player starts with 60 minutes and each move the clock does not start for 5 seconds. Please bring a chess clock if you have one.

The June US Chess Rating Supplement will be used. Other ratings may be used if higher as described on the National Open page. If you pre-register and your rating changes  you will be moved up automatically or down on request.

Every effort will be made to start players in the appropriate section, but if an error is discovered late in the tournament it will be corrected.  If there is any reason you may not be eligible for the section you entered, be sure to ask for a review before Round 1 is paired.

The decision of the chief tournament director regarding player or team eligibility, rating adjustments, unofficial ratings, or similar issues is final.

Sometimes a player has to skip a round.

1/2 Point Byes are available in any round (limit 2) if requested at least 2 hours in advance. A player with a bye receives 1/2 point for the unplayed game.

Round 5 or 6 byes must be requested before the start of round 3 and cannot be cancelled.

Membership in the U.S. Chess Federation is required of all players. You may join with your entry or on site. Players will not be allowed to complete the tournament without a valid membership.

Open Events that may also Interest the Kids

Prizes in Each Section

Unrated players may not win 1st prize in Reserve Sections. 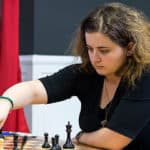 Each year we invite a player who is or was famous as a child star to host the International Youth Championship.

This year we are fortunate welcome 2017 U.S. Women’s Champion WGM Sabina Foisor as our guest host. She will give a simultaneous exhibition on Saturday night that is open to all players aged 14 & under.

The Romanian-American Woman Grandmaster has represented Team USA at 5 Chess Olympiads and 4 Women’s World Team Championships. She is an active promoter of chess on Twitch and Twitter.

This is a great opportunity for young players to meet their chess heroes.

The National Open and the U.S. Women’s Open are co-sponsored by the U.S. Chess Federation.